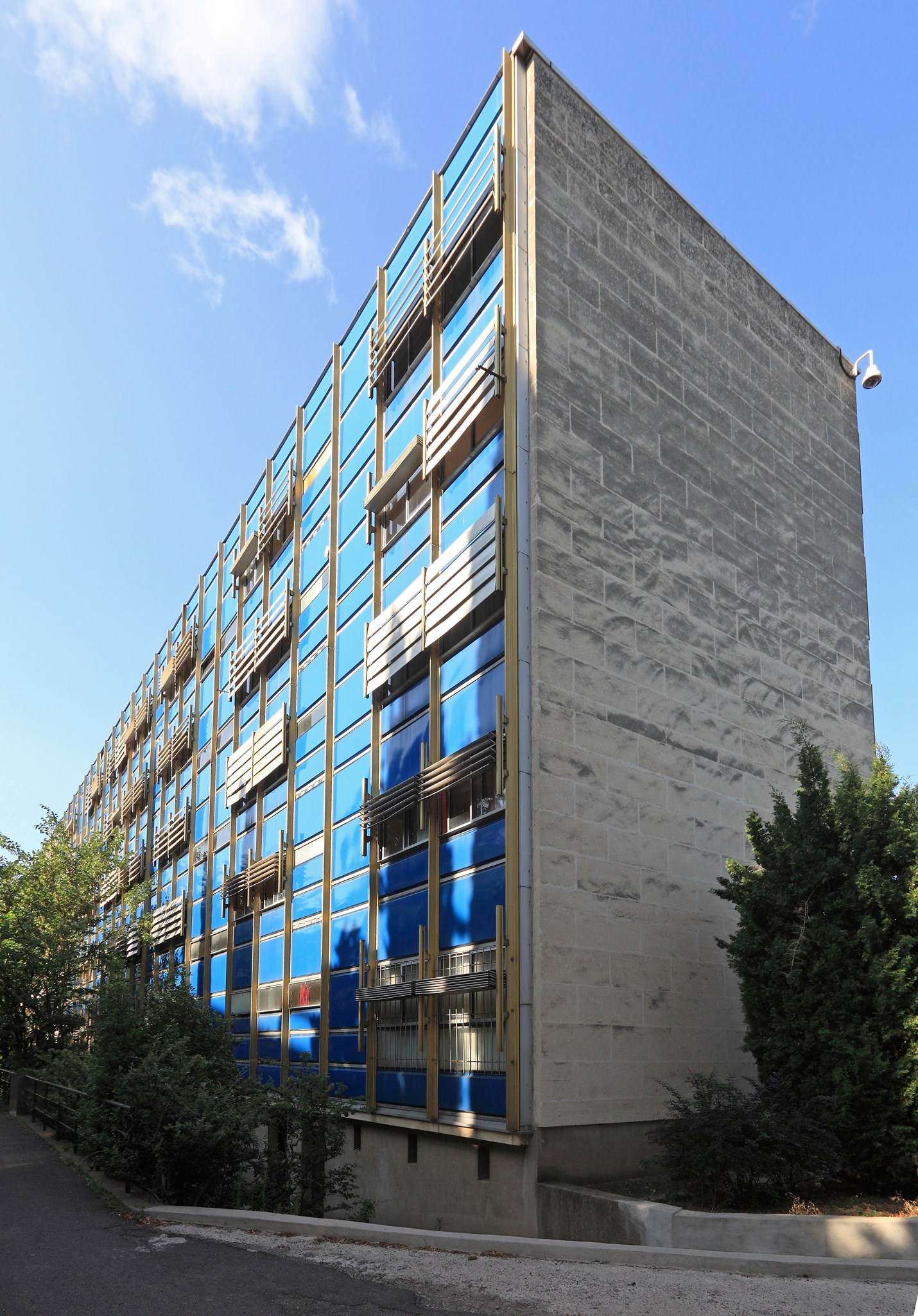 History of the building

In the early post war era, France was rebuilding in a significantly slower pace than the rest of Europe. National authorites thought the delay could be related to the artisanal construction methods and consequently introduced a modernised building policy. This is when the 1,75 meter "frame" structure was developed. When the schools' corridors were supposed to be 1,75 meter wide and the classrooms floor area correspond to 5 by 4 "frames". At that time it was also considered that most students had to be right handed, which is why the classrooms' windows were following the left hand side of the room to give light to the work in front of them.

The Jean Moulin school as inagurated in 1964 and was then the perfect example of the new building design. It featured the modern slender lines and large glazed facade sections and the inside was laid out according to the standardized frame structure.

In 2019 the school underwent comprehensive renovation. At the start of the project the school was in poor conditions and the initial work was concentrated to the removal of asbestos. It was followed by reallocation of the floor area and work to ensure proper thermal insulation and acoustics.

At the time of completion the school was provided with a modern indoor climate solution from us at Swegon. It includes air handling units, a wide selection of ceiling diffusers and our complete system for a demand-controlled indoor climate, WISE.

For more information about the importance of a good indoor climate in schools see our recommended blog below.

Read more in our blog, Would we let our kids skip breakfast before school?

A system for a demand-controlled indoor climate

Swegon WISE is a complete system comprising all the products needed to ensure an optimal indoor climate. The system has the ability to adjust the indoor climate throughout the entire building according to the present need in different locations of the premises.

This is possible as WISE connects the key indoor climate products in the building into an intelligent system. Sensors monitor the indoor climate and initiate adjustments to respond to the current demand.

Additional advantages of our Swegon WISE system is that installation and configuration is made easy through pairing of the products using a scanner and a tablet. The commissioning is then completed automatically.

WISE is advanced in the way that it brings together all the elements necessary to create an optimal indoor environment, but simple in bringing significant energy savings as the system adjusts to the actual need. Research has shown that school facilities are sometimes used as little as 30% of the day, by the means of WISE energy can then be saved when the classrooms are not in use.

The system's intuitive smart control gives an overview of the operation in the building and displays all climate-related information. Temperature, airflow, concentration of carbon dioxide (CO2) and volatile oganic compounds (VOC) are monitored and visualized on a room by room basis. It is possible to finetune the system and virtual rooms may be created to assign a function to each room. The latter also allows easy adjustments if rearangements of the floor area is taking place in the future.

More about economics and sustainability

A healthy and comfortable indoor environment

The sensors in the WISE system monitors all the above mentioned indoor climate factors and the five Swegon GOLD air handling units are adjusting their operation to ensure a healthy and comfortable indoor environment throughout the entire building.

The air is supplied to the building through various ceiling diffusers which are chosen depending on the puropse and layout of a room. Many of the diffusers in the Jean Moulin school have adjustable nozzles which enables different spread patterns and minimal noise and draught.